Come into one of the three bedrooms of the house.The view is exceptional and the sun floods the room, as it faces south.You can discover the Channel and the Bay of Sienna with its salty meadows where graze sheeps. You are under the spell of Normandy.

Situated near Coutances, one of the French Towns of Art and History, between Landing beaches and the Mont Saint Michel and in front of the Channel Islands, the Chambre de l'Amiral is ideally located to visit the treasures of Normandy.

Wether you come here for a romantic getaway, a relaxing stay or an adventure with family or with friends there is everything you could need at our doorstep. Come and visit our medieval castles, cathedrals, churches and abbeys for lovers of old stones. Indulge in some horseback riding on the beach, hicking in the dunes, or cycling on Greenways for sportsmen or visit one of our oysters nurseries in carriage. Beaches, fishing, sailing, nautical sports.... 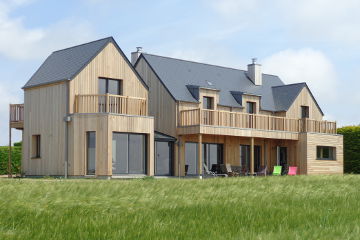 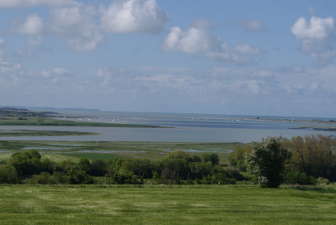 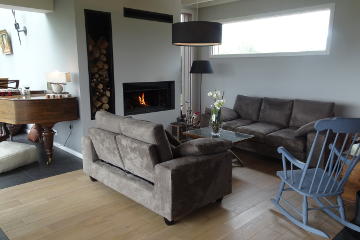 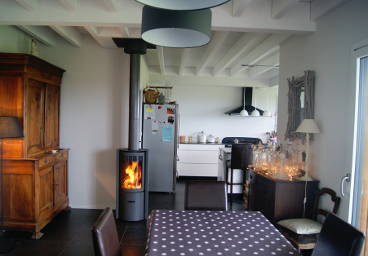 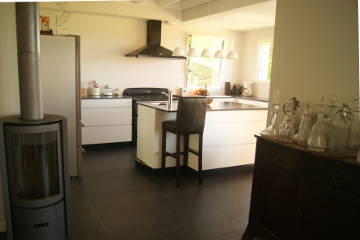 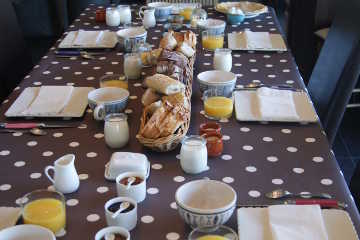 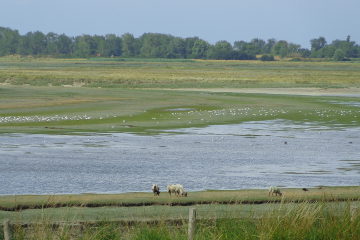 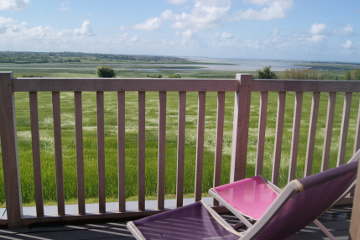 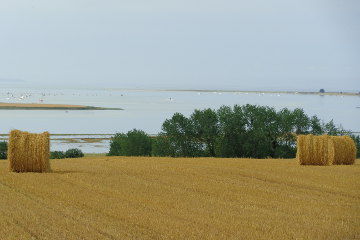 All bedrooms are located upstairs and have the same view over the sea and bay of Sienne. Each has a French window to a private balcony, facing South above the sea and the Sienne bay, with deckchairs and a table.

The stairs to the bedrooms are independent from the rest of the house - the hosts have a total independence during days and nights.

Free Wifi, television, kettle with a large choice of teas and herbal teas are available in all bedrooms. They are bright and comfortable, decorated in natural tones. The bedding (160cm wide) and linen are of prime quality. A hairdryer is available in all bathrooms.

A quality breakfast is served to you in the dining room at the ground floor; you will enjoy the magnificent panoramic view mixing countryside and sea. Tea, coffee, hot chocolate - orange juices - a variety of breads - as well as the home-made products: jams, yoghurts, cakes or other sweet pastries and certain breads.

Possibility of lunch and dinner on request, 30€ per meal.

UNESCO has classed the Mont Saint-Michel as a world heritage in 1979 ; this tourist attraction is a must see and the 3d site the most visited in France.
The « Wonder of the Western World » raises up in the heart of an immense bay invaded by the highest tides in Europe. It was at the request of the Archangel Michel, that Aubert, Bishop of Avranches built and consecrated a small church on the 16th October 709. In the 11th century, the Romanic abbey church was founded ; Saint Michel's statue placed in its summit peaks in 170 m above the bank. Le Mont Saint Michel was, between the VIIIth and the XVIIth century, one of the most important places of pelgrimage.
During summer time there is a night show with sounds and lights that brings to the discovery of the place, mystery and magic.

One of the big historic changes of the XXth century occurred here, on the beaches of Normandy, during the landing of the allied Forces, the decisive phase of the resolution of the Second World War .br / > You will visit Omaha Beach and its American cemetery, Utah Beach and its remarkable D Day museum, Arromanches and the vestiges of the pontoons of the artificial port as well as its museum, Gold Beach, Juno Beach, the pointe du Hoc, as well as Sainte-Mère-Eglise : history and emotion ...

Less than one hour of boat from Granville

Of the 365 small islands or rocks visible with low tide, only 52 are visible with high tide and only one island is inhabited (10 inhabitants at the year); neither car, nor bicycle, it is nature reserve and shelters a fauna and a remarkable and varied flora. It is not rare to see penguins and dolphins there. Of a length of only 2 km, the tour by foot is very easy and many beaches are available.

One hour of boat from Granville

Known as floral island, it is the biggest of the Channel Islands. It offers a great variety of landscape : footpathes alongshore, beaches with soft sand, steep cliffs, charming villages. Castles, gardens, pubs, but also typical shops, will make your experiment "so british".

The green island is an island with great character, with ramparts, towers and fortifications. The costs hide inlets, charming ports and footpathes along the cliffs. You will be able to visit Hauteville House, the famous house where Victor Hugo used to live in during his exile.

The feudal island is a timeless island, governed by a Lord who rules over the island. It is the smallest feudal government in Europe. Only bikes and carriages are allowed on the island, to discover the marvelous landscapes walking on the pathes lined with stone walls and wild flowers all over the island.

You won't get bord around the Chambre de l'Amiral !

Ride on the beach or in the countryside in Coutainville 4 km away ici.

Fishing from the shore

Visit of the oysters parks on horse carriage ici or visit of the mussels beds 5 km away.


It's very simple. You can either write to us at dominique@lachambredelamiral.com, or phone at 06 80 53 27 13 or contact us using the contact form below. We'll answer asap!

Thank you, we have taken your pre-booking request into account and will come back to you as soon as possible !

About the Admiral of Tourville : "The greatest mariner of the centery, as English and Dutch themselves admit, and the most humble too."